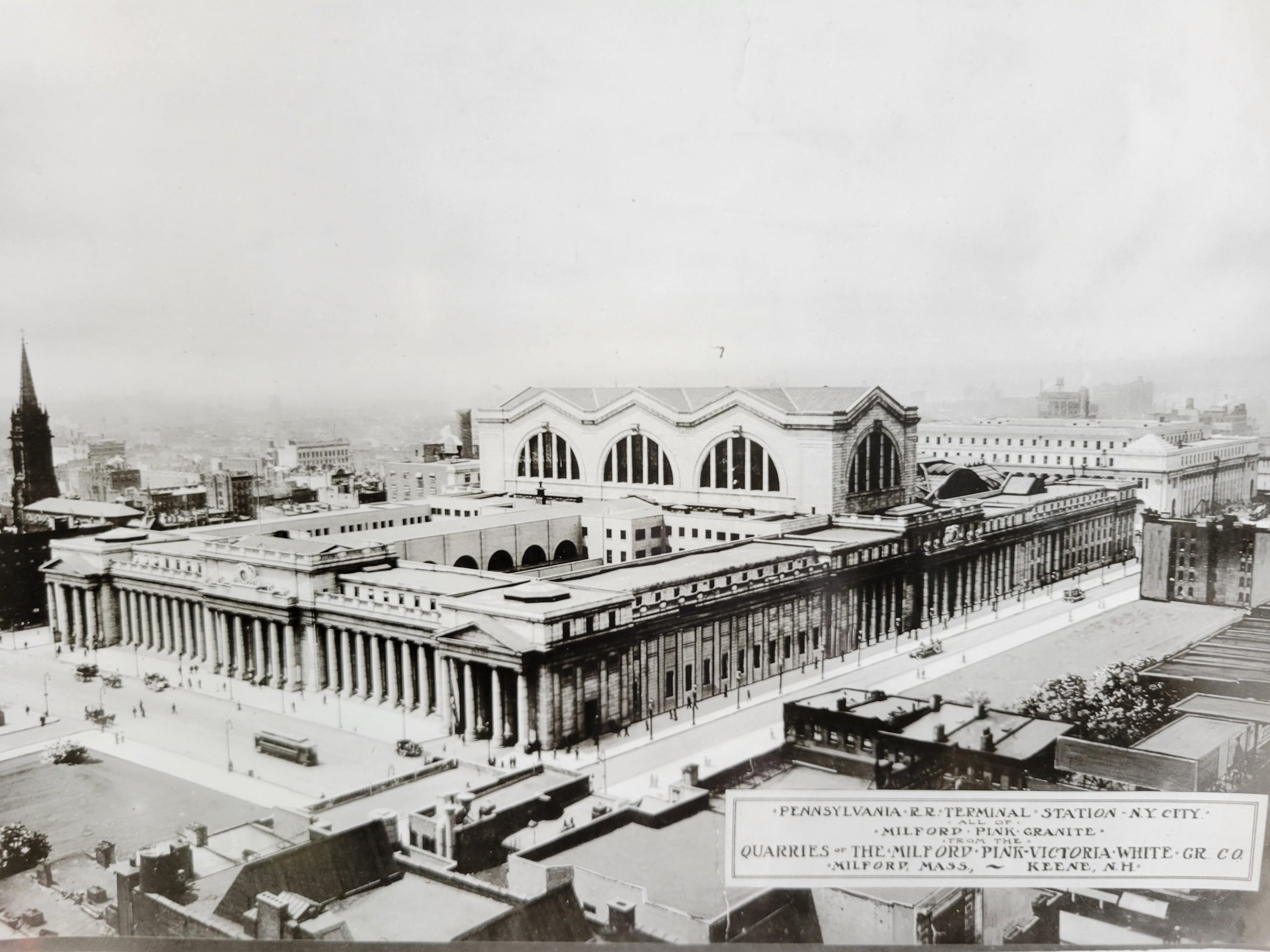 Dodds had a hand in many famous buildings around the country including the famous Penn station in New York City. The original Pennsylvania Railroad Station was constructed and completed in 1910, the façade fabricated in Milford Pink Granite quarried by the George Dodds Granite company. The building had quite a history and was state of the art during that time.

The building was originally built and named for the tenant, Pennsylvania Railway. It enabled direct rail access to the South for the first time. It occupied two city blocks from Seventh to Eighth Avenue,and from 31st to 33rd streets.  The building contained 11 platforms serving 21 tracks. It covered about 8 acres of land and was clad in a total of 490,000 cubic feet of Milford Pink Granite. it was the first rail station to separate the arrival from departure concourse. The New York Times called it “the largest building in the world ever built at one time!”

The planning for the building and infrastructure was quite involved. There was a need for a rail system to go west of the Hudson River into Manhattan as ferries were not a long-term viable option, but first a bridge and or tunnel was needed. At the time the building project was estimated to cost 100 million dollars. Planners wanted to construct the biggest and best terminal in the city, but because of the financial crisis during the late 1800’s, investors were hard to find. Plans were finally approved in 1902.

Passenger traffic began to decline after World War II, and in the 1950s, the Pennsylvania Railroad sold the air rights to the property and shrank the railroad station.  Plans for the new Madison Square Garden above Penn Station were announced in 1962. Though it caused much controversy and upheaval among the architectural community, they decided to demolish the building, despite the efforts of protestors to preserve the landmark. The cost to maintain the old building was much greater than the new smaller underground station that was air conditioned and cost them nothing. The city and planners also knew that the revenue from the new hotels and sports complex would be greater than the income from the shrinking railway station.

The New York Times’ editorial board wrote, “Until the first blow fell, no one was convinced that Penn Station really would be demolished, or that New York would permit this monumental act of vandalism against one of the largest and finest landmarks of its age of Roman elegance.” New York Times reporter Eddie Hausner’s photographed the sculpture Day by Adolph Alexander Weinman, lying in a landfill in the New Jersey Meadowlands.

A 28-story hotel and 34-story office building, now part of Penn Plaza, were built on the eastern side of the block, facing Seventh Avenue. The Madison Square Garden Complex would take up most of the rest of the block, facing Eighth Avenue to the west.[121]  The current Penn Station is located under Madison Square Garden. Elements of the original building were saved and have been incorporated into monuments and are on display at museums.

It saddens us to think about part of our past being torn down, but we are happy to have the photos of these architectural monuments, preserving them here with us in Xenia, Ohio! We are honored to have a hand in so many structures that impacted great cities all around the country, and many that are loved by the citizens and tourists who get to see them on a daily basis! For more reads, see our other blogs on our history you probably didn’t know!