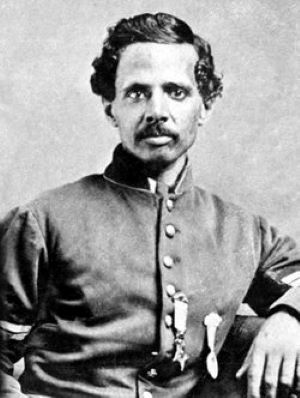 Veterans Who Made an Impact-Powhatan Beaty- By Desiree Roose

Powhatan Beaty was born into slavery in Virginia and moved to Cincinnati Ohio in 1849. During the Civil War, he enlisted as a private but was quickly promoted to first sergeant of Company G in the US Colored Troops. During an attack of Confederate forces in Virginia, all of his company was either wounded or killed. He took command of Company G and received the congressional medal of honor for his bravery. He is one of two African-Americans buried in Ohio to receive the Medal of Honor for service during the Civil War. He passed away in 1916 and is buried in Union Baptist Cemetery in Cincinnati where he has a historical marker.