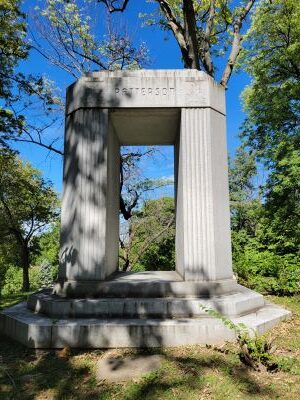 Veterans Who Made an Impact- Robert Patterson- By Desiree Roose

Robert Patterson was born in Pennsylvania in 1753 and moved to Kentucky when he was 22 years old to help settle Lexington. During the Revolutionary War he joined George Rogers Clark on several expeditions as well as fighting in many battles. He also served with Daniel Boon in the Kentucky militia where he became a Colonel. In 1788, Patterson along with others purchased 800 acres from John Cleves Symmes and settled the land they named Losantiville, now Cincinnati. He played an important role in the development of Cincinnati and Ohio, eventually moving to Dayton where he established a farm and sawmill. He spent the rest of his days in Dayton and continued to have a role in the military. He died in 1827 and is buried in Woodland Cemetery in Dayton along with numerous members of his family. His house is now the home of the Montgomery County Historical Society.